Sherwood Cycle: What's In A Title

One of the things I occasionally do is clean out my "Writer's Closet".

Except it's now more of a room than a closet. I always have a writing wall, where I write things about the project I'm working on--characters, scene outlines, music, bits of dialogue, etc--and that wall gets more and more full until I finish the initial draft of the project, when I pull all the 3x5 cards off the wall and start with a "clean slate", as it were. 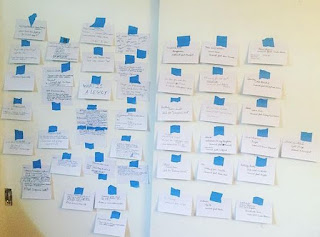 But because a wall has only a certain amount of space, I have to create files on my laptop and in various notebooks that are then stuck in my filing cabinet or my cloud drive or whatever because I'm the type of writer that keeps everything.

And one of the things I keep is a list of possible titles for my project.

I can count the number of times the first title for a project stuck on the finger of one hand.

That's one finger on one hand.

One of my favorite authors once held a title contest for one of her novellas on her website(which was a really fun read), and another one made me feel even better when she gave some advice to her blog readers about writing any type of fiction.

With the Sherwood Cycle, every single of the scripts has gone through at least three title changes, and not just because I can never make up my mind about anything(thank you ADD).

Recently I came across a little post-it note I scribbled on while writing "Wolves of Sherwood", and  there wasn't one title one it. There were four.

Four different titles crammed onto this tiny piece of paper.

I really used to bother me when a thing like this happened, but not so much anymore.

Sometimes, my gut tells me the title doesn't work.

Sometimes, my characters tell me the title doesn't work, and why(yes, I'm on speaking terms with all of them, it's an author thing, just go with it)

And sometimes it's just a Place Holder Title because you have to call it something other than that-one-project-i'm-working-on-but-can't-explain-cause-it's-complicated.

(Yes, I have called a few projects this before. Also a thing)

Another thing that I've learned over the past couple of years is that a title doesn't just have to work for you--sometimes it also has to give some kind of clue on how to market your project.

One of the greatest movies ever made, "The Princess Bride" was a box office flop for that reason--no one had any idea how to market it--even the trailer was a mess.

Box office sales plummet, cast and crew suffers, and the film either "comes back via word of mouth/DVD(or in the case of "The Princess Bride", VHS" or disappears from existence except as an article on Google or whatever.

Because I'm the type of weird person who cares about that kind of thing, and I like to make things easier for all parties concerned, when I'm in the revision process one of the things I look at and constantly tweak and re-write is the title.

And I'm glad that I'm not the only one.

All part of the revision process.

Here's the next chunk of my current project's soundtrack, while I'm at it.

Now it's "Out of Nottingham".

Much better, in my opinion.

Carry You (feat. Fleurie), by Ruelle

Are You Even Real?, by James Blake

Pull Me Down, by Mat Vansen