Lure of the Fox: Carmine Reynaud

Reynaud is like Jafar from Aladdin. The new one(aka Marwan Kenzari. Google him, cause WOW!!!!).

Yes, I know there are people who didn't like the interpretation of this Jafar, but I loved it! He's subtle; he doesn't explode in public(often); he knows how to manipulate; he can threaten people without even raising his voice.

That is the Reynaud type of scary.

Which is great, because Reynaud is the villain of this piece.

Unfortunately, Reynaud's physical model is not from Aladdin. He's from the films "Alpha," "Atomic Blonde", "Game of Thrones", "The Last Kingdom", and the upcoming "Where'd You Go, Bernadette". 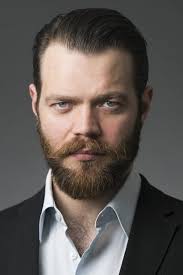 Jóhannes Haukur Jóhannesson. You know what's great about this actor? He can say things in a single look than some actors can say in a paragraph. Watch "Alpha" if you don't believe me. Or just watch "Alpha" cause it's that good.

This is a guy you don't want to mess with. He's dangerous, but he never lets it be known in public--all his threats come in private.

You guys, Reynaud scares me.

And his soundtrack is perfect for the kind of human being that Reynaud is. It's dark and gritty and...well here, give the highlights a listen:

Feed the Wolf, by Breaking Benjamin

This Pain, by Kamelot